Emerging from the fog:

If you’re struggling to prove the value of marketing at your organization, you’re not alone.

For large, complex companies in particular, having many moving parts—but a lack of proper structure for all of these parts—often spells disaster: e.g., wasted leads, poor conversion rates, low pipeline velocity, and inadequate sales and marketing alignment.

Unfortunately, this often means there are no clear metrics into what’s working and what’s not—a phenomenon commonly referred to as “the fog of marketing.”

Fortunately, it doesn’t have to be this way.

Leading a monumental transformation of her marketing organization, Lisa Cole, VP of corporate marketing at FARO Technologies, tackled these common frustrations head-on—and won, proving marketing as a valued driver of revenue growth for the company.

How did FARO achieve this (and a whole lot more)? It took a combination of outstanding leadership, reorganized processes and systems, rationalized terminology, and a strong commitment to change.

What was the vehicle for achieving such a transformation? Hive9’s marketing operations and resource management system: the secret sauce to keeping all of these moving parts running smoothly, as well as clearly quantifying the value of marketing.

The marketing challenge: chaos, silos, and no proof of ROI

When Lisa joined FARO in fall 2019, she was given a small window of time to assess the company’s marketing maturity and see what changes needed to be made—soon discovering what she calls “fullon chaos” among 55 horizontal marketers across the globe.

“Plans were not laddered to any business strategy. There was no linking between planning and budgeting. There were zero established operating procedures and no consistency on terminology,” Lisa explains.

With teams supporting marketing efforts across 12 buying personas, 16 countries, nine languages, and four business segments, the highly complex marketing organization had been planning out of spreadsheets and PowerPoints, siloed across the business. This meant there was no single source of truth when it came to reviewing plans or reporting on performance.

“Nobody knew how our budget was used,” she says. “Nobody had any evidence of plans. Nobody had any data that could have indicated whether anything had an impact or not.”

Moreover, FARO also had a scattering of 18 PR agencies on retainer around the world, none of which were working from one cohesive marketing plan.

On the financial side, FARO didn’t have infrastructure in place to know how tactics were performing across spending. Rather, according to Lisa, it was “double-digit spreadsheets that didn’t all have the same formatting.”

At the beginning of each year, dollars were allocated to marketing as a function, distributed into buckets, and disseminated to regional marketing directors around the world.

Then, each regional marketing manager had their own method of planning, allocating dollars across tactics, and tracking and managing expenses. This made reconciliation impossible.

“Once the regional marketing directors gave out the dollars, they had no idea how they were used,” Lisa says.

Lisa had her work cut out for her, but with nearly two decades of experience as a successful marketing strategist and advisor, she was certainly the right person for the job.

“Plans were not laddered to any business strategy. There was no linking between planning and budgeting. There were zero established operating procedures and no consistency on terminology.”

The marketing solution: restructuring and getting aligned

Committing the marketing organization to a major transformation, Lisa established a four-step process— Review, Align, Mobilize, and Propel, known as RAMP— involving a series of 10 phases to keep teams aligned and motivated under clearly defined steps.

Over the next few months, the organization also restructured and downsized on the personnel side, carried out what Lisa calls “whack-a-mole” on events to which had been overcommitted, established alignment with product and sales on revenue expectations, and fleshed out plans according to region, market segment, and country.

After further organizing by creating Forrester’s Plans on a Page for each segment, she soon realized spreadsheets weren’t going to cut it anymore for managing these plans.

Enter Hive9: one place from which everyone across the globe would be able to access all marketing plans, budgets, and performance metrics.

But first, it was important for FARO to establish a structure for the mass amounts of data that were about to be managed in Hive9. However, it was the first quarter of 2020: The world had shut down, so nobody could come together in person to get aligned on the plans under the newly established structure.

“We learned the hard way that if we want the plans to be executable and reportable, we need to make sure they’re all talking ‘apples to apples,’” Lisa explains. 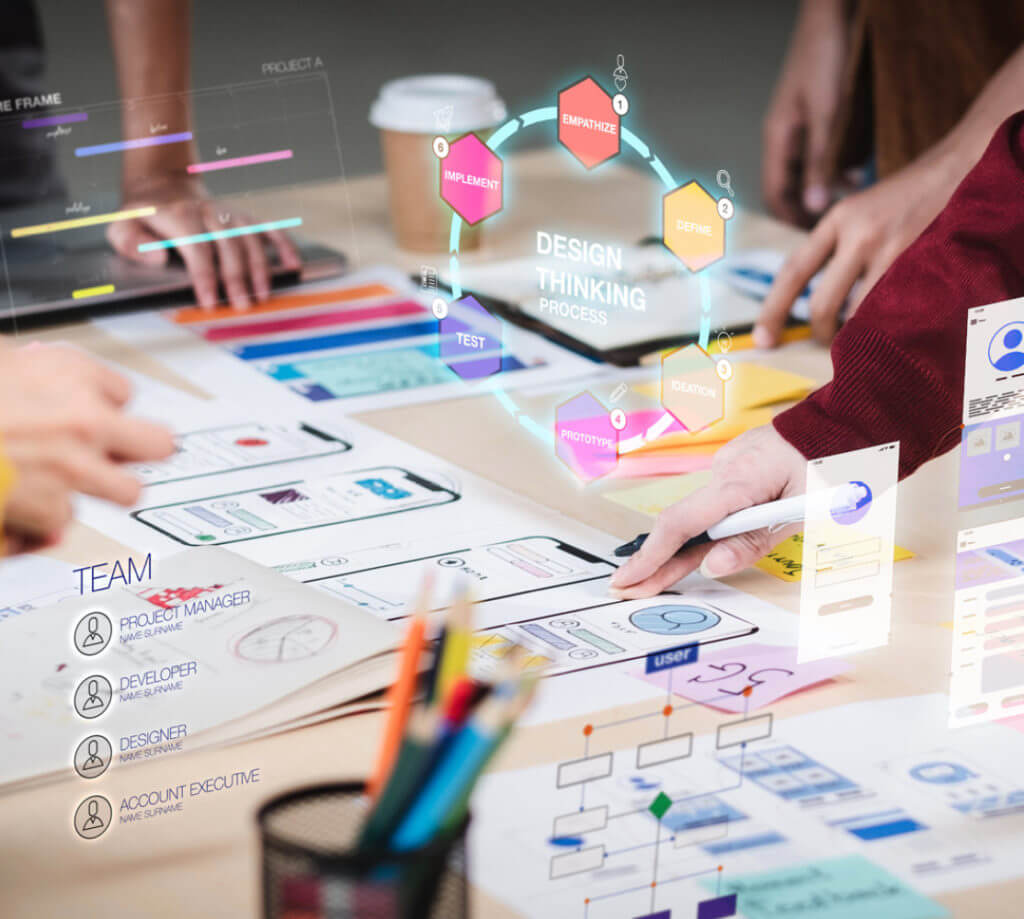 First, FARO clearly defined a lead process workflow, which set in place a consistent language and process for demand generation.

“It got us aligned on each key term, the definition, and the source of truth where that data would come from,” says Lisa.

Next, it was time to translate service-level agreements into a lead flow visualization.

“It was connecting the dots from that terminology to how demand gets managed and flows through the revenue pipeline,” she explains.

Lastly, the teams got aligned on decisions about setting up campaigns, programs, tactics, data attributes, and any other pieces of data that would be critical not just for effective planning, but also for reporting.

“This gave us the foundation we needed to then make decisions about the provisioning of the platform,” Lisa says, “and how data might need to flow between Hive9 and our SalesForce instance, for example.”

“We learned the hard way that if we want the plans to be executable and reportable, we need to make sure they’re all talking ‘apples to apples.”

The results: transparency and accountability 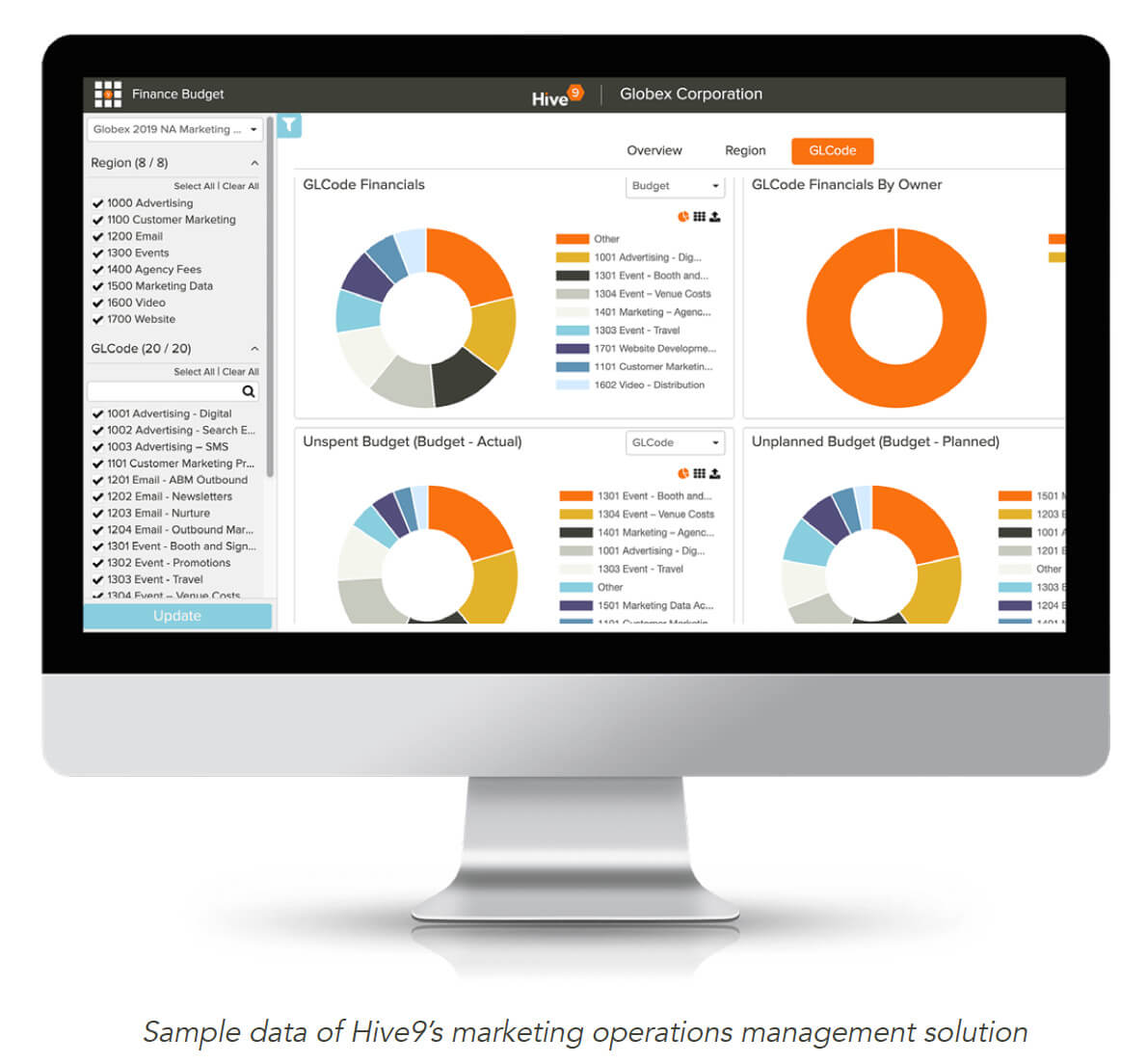 Now with an organized team of approximately 35 marketers—all aligned on language, operating principles, and ways of doing marketing—FARO uses Hive9’s system for all of its planning, budgeting, terminology, processes, waterfall performance, ROI, and attribution. This is all integrated with its re-engineered SalesForce instance and Jira project management software, connecting the dots on everything marketing is doing across the globe.

“Hive9 was excellent in helping us understand the difference between theory of what might have been kept in the PowerPoint and what reality is,” says Lisa.

Here’s how it works: The four newly established integrated marketing directors (IMDs) are in charge of building, funding, and reporting on the performance of a plan in Hive9, with one IMD per business segment. They allocate a certain number of dollars to a specific campaign, set the goals and objectives, determine a campaign theme at a high level, and go to the program managers to translate the campaign into executable tactics.

“The IMDs’ sole job is keeper of the global marketing plan and the dollars,” Lisa explains. “And they’re held personally accountable for whether those dollars deliver return on investment.”

Luckily, with waterfall and attribution reporting in Hive9, they’re clearly able to show what’s working across tactics, what’s delivering pipeline for sales and ultimately revenue for the company, and where things need to be shifted.

When each IMD has a set of metrics for their plans— e.g., sourced revenue, lead volume, conversion rate, velocity, or cost per lead—and those metrics are easily reportable from one place, that makes for one extraordinarily aligned sales and marketing function.

Now with an organized team of approximately 35 marketers—all aligned on language, operating principles, and ways of doing marketing—FARO uses Hive9’s system for all of its planning, budgeting, terminology, processes, waterfall performance, ROI, and attribution.

“We have improvement scenario plans based off lead-to- revenue projections,” Lisa says. “On a monthly basis, we receive a beautiful reporting package assembled by the marketing operations team.

“Between the IMDs, me, and the global campaign management leader, we’ll review marketing performance data from Hive9 and other specialist reports, like database health or social media performance and engagement to understand how effective we were at growing our audience, building trust and engagement, and then monetizing that audience to fuel the pipeline.

“From there, we’ll see where we’re at across metrics, including budget variants. If we find that we’re underspending in an area, for example, we look at why it happened. We’ll decide how to address what will likely be a gap in lead flow for the following month, or what else we might need to pivot on to meet our marketing goals. For each metric, we look at a scenario to see how things need to play out.”

“Hive9 was excellent in helping us understand the difference between theory of what might have been kept in the PowerPoint and what reality is.”

If marketing activities do, indeed, need to pivot, FARO turns to Hive9 to make data-proven decisions on their investments.

Last year, when an in-person event was in danger of shifting to virtual, for example, they were able to go into Hive9, signal to the CFO where a variance in spending could happen, and keep all parties apprised of changing plans and budget allocations in real time.

“We would never have been able to do that in a spreadsheet,” Lisa points out. “It just wouldn’t be able to happen.”

Moreover, this has led to a more harmonious relationship with finance.

“The conversations with the CFO are very data-driven. When I show up, I might bring forward a business case and say, ‘We diagnosed our funnel from lead to revenue; here are the dynamics I’m seeing. Here’s where marketing dollars are performing well, or not performing well, and here are some areas where we can address leveraging marketing resources. And here is the ask.’”

Pulling up Hive9’s marketing calendar and “drilling down into the details” of plans and costs, Lisa says, she’s able to clearly show how much is expected to be spent, as well as how much ROI is expected in return. “This data-driven approach has proven very effective,” she adds. “I don’t spend all my time asking for more money. I can be very intentional about when I do come to the table to ask for more.” 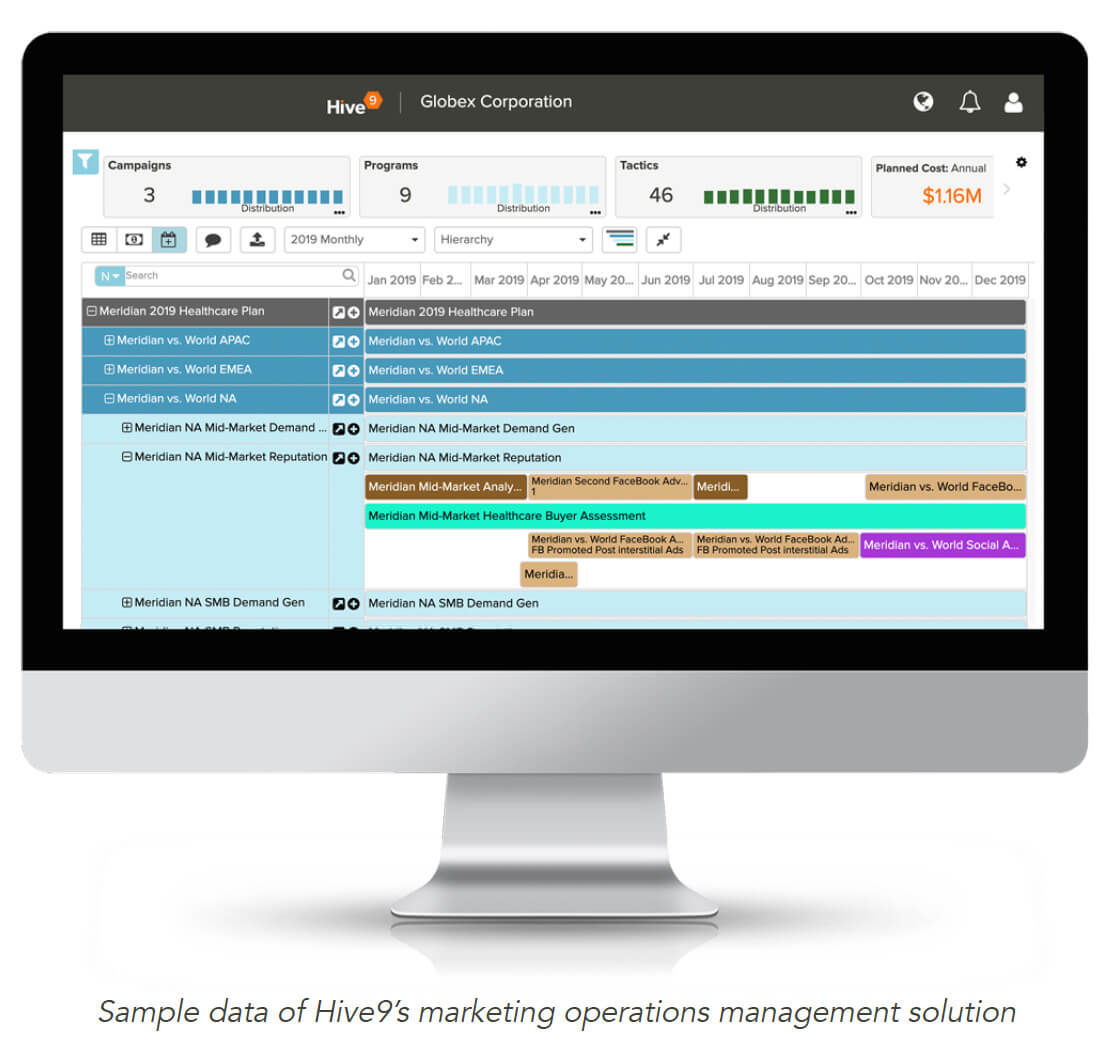 The end of spreadsheets

If you’re wondering what happened to all of those spreadsheets, PowerPoints, and other disparate tools, they’ve officially become a thing of the past. And with the results the newly revamped marketing organization is getting with Hive9, why would anyone ever go back?

“How could we manage this complexity of being a global organization, with the number of messages we’re delivering across all of our channels, in a spreadsheet?” Lisa asks.

Luckily, they don’t have to anymore. Although it can be hard to shift away from tools you’re familiar with, Lisa clearly laid down the law and broke the organization’s Excel dependency.

“We have moved out of spreadsheets officially,” says Lisa. “We put a stake in the ground. There are no more spreadsheets. We’re fully in with Hive9.”

“We would never have been able to do that in a spreadsheet. It just wouldn’t be able to happen.”

Thanks to all of these changes in just two years, marketing went from having zero integrity around financial management, no methodology on planning, and no single source of truth for reporting, to being seen as a relevant partner in driving FARO’s revenue engine.

And their successes certainly aren’t going unseen in the industry: For the 2022 Forrester B2B Summit, Lisa and her team have taken home a coveted Return on Integration Honors award.

Marketing doesn’t have to be like a recess playground. You just need the right tools to cut through the chaos.

About Hive9, a BrandMaker company 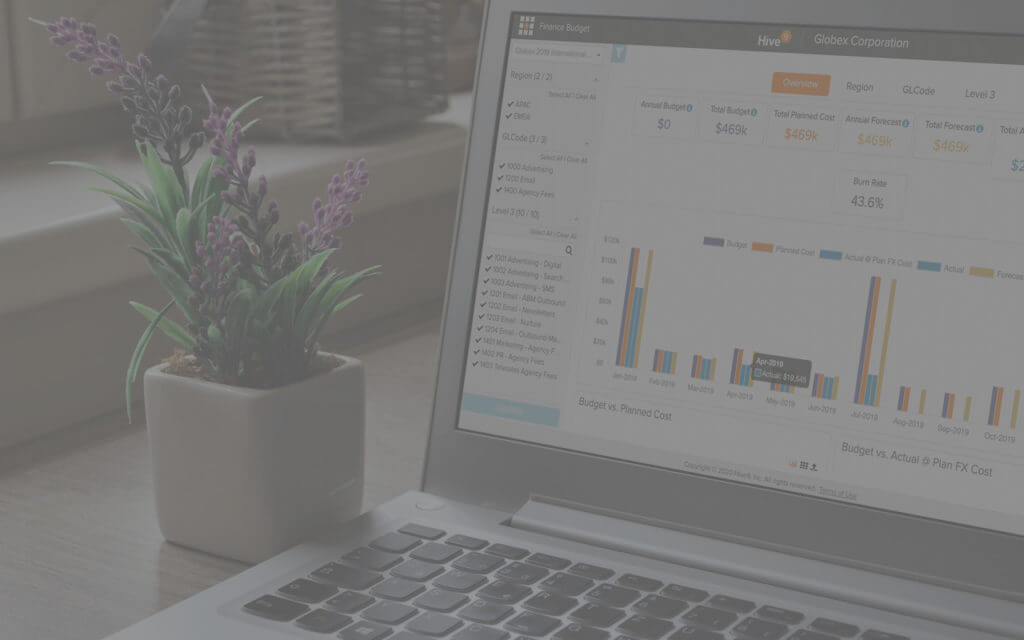 Want to see Hive9 in action?